Nomenclature and species descriptions
I have followed the nomenclature used by The Plant List produced by Kew et al. Only species on their approved list have been included. That is not to say I share their opinion in every case, but it seems a good place to start.

P. azureum Fenzl.
(syn. Muscari azureum, Hyacinthella azureum, Bellevalia azureum, M. praecox.)
The narrowly oblanceolate leaves are6-20cm x 15mm, erect to spreading and somewhat hooded at the tip. The upper surface of the leaves is very obviously pale and glaucous. This is a small plant with a dense ovoid raceme 1.5 to 3 cm in length. Fertile flowers are bell shaped, pale to bright blue with each lobe having a darker stripe. The pretty flowers have blue anthers. It grows in the alpine meadows of N. and E. Turkey. There is a very good white form M. azureum f. Album. Both the blue and the white forms make first class garden plants but many of the plants in gardens and most of those in the trade are riddled with virus. This can look particularly unpleasant in the white form. Best grown from seed.

P. coeleste Fomin
(syn.M. coeleste, Bellevalia coelestis, M. elegans, Bellevalia turkewicxii, Hyacinthella turkewicxii, M. turkewicxii, P. turkewicxii)
The bulbs are small, 8-15mm and don’t appear to produce offsets. The 2-3 linear lanceolate leaves are canaliculate, prominently veined and 5-14 cm x 3-7 mm. the scapes are 6-12 cm, the raceme ovoid to broadly cylindrical and the 6-24 flowers are sky blue and not constricted. The spike of flowers is somewhat lax when compared with M. azureum. Most of the literature refers to the flowers being suberect, but in my experience this is never very clear. Importantly all the flowers are hermaphrodite. It survives out in the garden here but does much better in a cold greenhouse or bulb frame.

P. chalusicum D.C.Stuart
(syn. M. chalusicum, M. pseudomuscari, P. pseudomuscari, Bellevalia pseudomuscari, Hyacinthus pseudomuscari, Hyacinthella pseudomuscari)
The plant is very close to M. azureum but larger in all its parts. The flowers are pendulous open-mouthed bells of sky blue with a darker stripe. The spike is much laxer than in M. azureum and the pedicels are clearly visible. It was first introduced from the Chalus Gorge in Iran in 1963. in the wild grows on rocky ledges and in light woodland. The deeply channelled large leaves are produced well before the flowers and are often coiled on the ground. In cultivation they appear in October/November and the flowers in February/March. This is a good garden plant but does even better in a bulb frame giving the very large root system plenty of room to develop.

P. forniculatum Fomin
(syn. Bellevalia forniculata, M. forniculata)
From damp alpine meadows of Turkey. Confined to NE Anatolia where it is often locally abundant. A snow melt plant. A stunning “unreal turquoise blue”. Slow in cultivation and must not get too dry.

P. inconstrictum Rech.f.
(syn M. inconstrictum.)
Bulb 1-2 cms. in diameter. Tunic pale to dark brown. No (few) offsets. The fertile flowers are very dark violet blue to blue black with the tube and the teeth being the same colour. The pedicels are2-6mm. Sterile flowers few, paler, ovoid and shortly pedicellate. Not or slightly constricted at the mouth. The 3-7 erect leaves are deeply channelled and narrowly linear, 15-20cms.x2-5mm. Scapes 10-15 cms.

Some plants collected from the mountains of NW. Iran are reliably hardy in a sunny well drained spot here in Norfolk. However, those from Cyprus do much better in a cold greenhouse or bulb frame.

The National Collection of Muscari 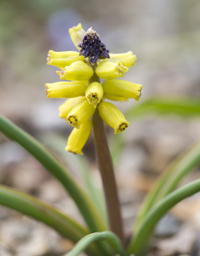